That "one kid" was my kid 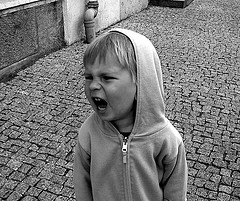 Have you ever been at a playground, a classroom or a family event where there's that "one kid" who's a little overaggressive, pushing other kids, knocking down another child's projects or looks like they’re in 6th gear? And, like me, have you judged this behavior, saying to yourself, “That kid needs more discipline," or "What horrible parents. I'd knock some sense into that kid if he was mine." We’re all a little guilty of these thoughts.

Well, my son used to be one of these children. And, yes, I've seen the judgment and condemnation in the eyes of other parents as my son engaged in said behavior. As a father, I felt humiliated, embarrassed and not in control of the situation. I kept thinking to myself, “Where did we go wrong?”
Let’s be clear, I love my son more than myself, as does his mother. And by the age of two, we started to understand that our skills as parents raising other children did not work so well with him. He was not talking, he chose to run everywhere instead of walking and had more energy emanating from his body than a cadre of sugar-fed fifth graders. Our house had become the Land of Broken & Destroyed Toys. Even our then babysitter, a late fifty-something mother of four, was so exhausted by the end of the day that she could only sit as he bounced around the house like a pinball.
We thought placing him in a well-known preschool would benefit him, give him structure and a social outlet. Well, that didn't turn out well. Within three months, his teachers spent more time with our son than with any of his other classmates. He ran, knocked over other students' projects but, most important, he couldn’t work independently. So, sadly, they recommended our son be removed from the class and referred us to a local organization that could possibly help and find a better place for him.
I was heartbroken, humiliated and angry. Why angry? We were spending five figures in tuition for him, so you'd think they'd invest some of that money on additional support for students like our son (as a side note, I've now met four other parents who've been asked to leave for similar reasons). Anger was prevalent in the beginning stages of this new challenge.
It was dark time for me as a father: I was coming to terms with my son’s condition, wrestling with blaming our bloodlines or a possible prenatal or infant injury that encouraged me to stay in a state of denial. But something happened on the way—something that I didn't expect. And let's be clear, folks, us fathers can be an exceptionally stubborn, non-empathetic and clueless bunch of fools. We can be told something over and over again and it won't stick. And in this context I'm guilty. So what happened? I guess I can say that after 360 half-days at a therapeutic clinic, 52 social-group appointments, 96 occupational-therapist sessions and 120 speech-therapist visits, that, yes, there is hope and that, yes, there are trained, compassionate, caring and selfless professionals out there. There are people who will sit with you and your child, day after day to help them communicate, regulate, socialize and become more self-aware.
During this two-year transition, I realized that my son had been living in his own darkness, trapped in the only reality he knew, where extreme physical activity was the only way he knew how to process his thoughts and communicate non-verbally to the rest of the world. As these amazing therapists watched, listened and taught my son, I learned there was a sensitive, shy and beautiful young boy trying to come out—and he did. He’s a hilarious, funny, sneaky and mischievous 4-year old boy who has a normal, strong self-interest in learning, playing and eating as many gummy worms as possible.
Okay, so what's my point? Was it that I've come to grips with my son's challenges and will be growing and learning with him? Kind of, but that's a good one. My point is that I love my children more today and will love them more tomorrow and the next day after that. I am no different than any father or parent that I've met (or have yet to meet). If you go through the denial, anger, negotiation then acceptance, know that it’s okay. Don’t beat yourself up. Instead, join a social group, commit to attending a session once a month with your child or even volunteer to help. I joined LEEP Beyond, a non-profit that provides educational programming for children like my own. It’s been rewarding to meet not only other children like mine, but their amazing, loving parents.
Posted on January 16, 2013 at 5:49 PM