“Fake it until you make it,” Kelli Harris, preschool teacher at Akiba-Schechter, advises parents leaving their two-year-olds at preschool for the first time. “If you’re uneasy about leaving your child, don’t show it,” she said. “Cry in the hallway. Kids know when their parents feel unsure, and that makes them feel unsure themselves.”

Cooperation. Trust your child’s teacher and rely on her experience. Most likely, she’s been through the process many times. Remember you’re a team.

Clarity. If you’ve told your child school is a good thing, and he’s going to have fun, don’t confuse him by saying you’re sorry to leave him. When you say you’re leaving, leave. Actions should follow words.

Consistency. Stick with the program. Leave even if your child is crying. According to Harris, saying goodbye is the hard part, so make it swift but something your child can count on. But never just leave. Saying goodbye is an important part of the routine. And return on time for pick-up. 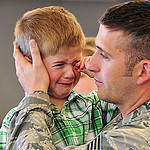 For most kids, Harris has found, separation anxiety is not an issue after two weeks. If your child is having a hard time, find a classroom activity she likes, and head for that when you arrive. Bringing a lovie, like a favorite blanket, might also help, but check on classroom policy.

Initially, leaving your child at school is hard for parents and child alike, but minding the 3 Cs—being cooperative, clear and consistent—will ease the process. Soon your child will adjust to the big world of school while you might still feel that twinge at how grown up he already is.

Annette Gendler is a nonfiction writer and lives in Hyde Park with her husband and three children. Visit her at annettegendler.com