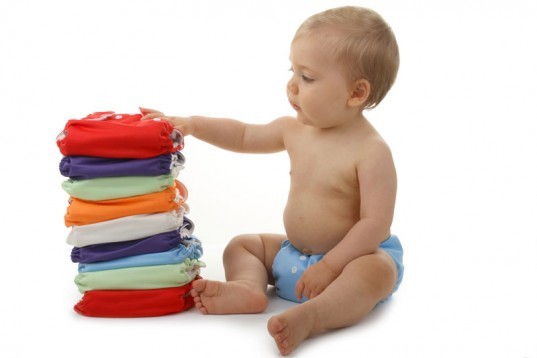 The mere mention of cloth diapers sets eyes rolling, gasps, whispers of "eew" and "you must be kidding?" As a mom of three, I've had experience with both cloth and disposable diapers. Shocking but true, the cloth diaper store owner used disposable diapers. Gasp! So, from one experienced mom to another, here are five great reasons (in no particular order) to consider making the switch:

1. If I only knew then what I know now: After disposable diapering two children well past the "average age" of diapering, I now know that I would have saved over $10,000 if I'd invested in cloth diapers from the start. No kidding! Disposables were the worst investment decision EVER! Imagine the vacations I could have taken with that money...

2. Anyone who disposable diapers knows what I'm talking about when I mention loads and loads of poop smeared clothing in the washing machine. Talk about yuck! If you use cloth diapers, that just doesn't happen. Really—no blow-outs and poop goes in the toilet where it belongs!

3. Given the choice between a comfortable pair of soft, organic cotton, underwear - vs - a stiff, scratchy pair made of paper, plastic and carcinogenic chemicals—which would you want on your bum? I'm just saying...

4. Each child in disposable diapers uses more than 6,500 diapers from birth through potty learning; producing more than 1 ton of garbage per child, per year they are in diapers. Disposable diapers account for approximately 7,580,000,000 pounds of human waste per year in landfills. Need I say more?

5. Making the switch to cloth diapers was easy and fun. Yes, I said it, fun! Plus, as an added bonus—kids in cloth typically potty learn at least 1/2 year earlier than kids in disposables. Cool, huh?

Remember, there are 'shades of green.' Learning is the first step to making informed decisions which are right for you and your family. Happy greener parenting!