Dads shouldn't get credit for showing up 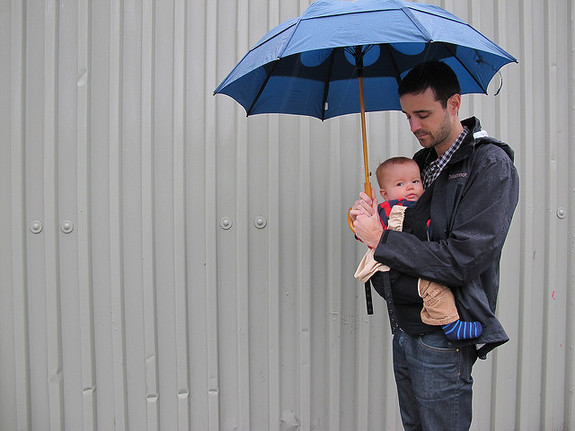 Exhausted, sweating, and questioning my travel attire (for some reason I thought jeans and a hooded sweatshirt would make the perfect Caribbean outfit), I just wanted to escape the customs line at Punta Cana International, find a bottled water and our seats on the shuttle, and then finally check in to the resort so the relaxing part of our four-day Dominican Republic vacation could begin.

With our then–8-month-old son taking in the sights from his comfy perch in the Ergobaby, my wife and I worked our way up to third or fourth in line when I felt a tap on my shoulder. I turned and saw a man in his early- to mid-60s we had spoken with a few minutes earlier during the brief shuttle ride from our plane to the customs building. Our son’s penguin pajamas were the topic of that lighthearted conversation as he and his wife shared how they used to read their son a penguin book. This friendly exchange was a nice way to break up the strains and stresses that come with disembarking a plane with your hands full of luggage and an infant who could get agitated at a moment’s notice. But once we stepped off that shuttle, I assumed the conversation was over and we could get back to the business of starting this trip.

“You know what? I just want to tell you you’re a great dad,” this man told me with a wide smile.

Excuse me? But … why? After saying, “thank you,” my mind started racing as I wondered what I possibly could have done during the four-plus-hour flight from Midway, or during our conversation on the shuttle, that would cause this man to go out of his way to compliment me on my parenting abilities.

“I’ve been watching you with your son,” he continued. “It pays off spending time with your children because they will grow up being close to you.”

What a nice comment. I had never heard someone say it quite that way. It made me think how my wife and I would love nothing more than to always have a strong relationship with our son. But beyond that, his unexpected comments made me wonder why my wife, no matter how much she does and how much she means to our family, rarely, if ever, receives these type of comments from strangers or family members. I’m also guilty of not taking enough time to voice my appreciation for what she does, and I’m embarrassed to say that because my wife, without a doubt, is the one who makes our family work.

She’s the one who brings the calm when our son’s bedtime storms arrive. She’s the one who creates catchy French songs on the fly and transforms feeding and diaper time into fun and memorable experiences for all. She’s the one poring over baby nutrition books and websites and spending Sunday afternoons cooking so our son can experiment with new foods and flavors. She’s the one learning about child developmental stages and educating me on what we should expect. She’s the one ordering his diapers and clothes and toys and ensuring that our son’s needs are always met. She’s one of a kind.

Yet, despite all of this, she too frequently gets unsolicited advice from people who have no business telling her how to be a mom. “Your son is crying—he must be hungry.” (Even though he just ate.) “You need to hold him more.” And I love this one: “He’s sneezing. You need to change his diaper.” Meanwhile, I’m the frequent recipient of the “You’re such a great dad!” looks and comments from strangers for just doing what dads should be doing, like making a bottle in the grocery store aisle and feeding my child when the “I’m hungry” tears start flowing, taking him on walks around the neighborhood in his stroller, changing diapers—even if that means on the floor—when we're at a restaurant or store, or carrying him off a plane and interacting with him.

And let’s not forget the people who go out of their way to help me when I’m struggling to maneuver my son’s stroller, like the woman at the cleaners who barely looks me in the eye when I’m alone but jumps out from behind the counter and props the door open for us (and makes plenty of baby noises) when my son is along for the ride, or if we’re taking a walk and I drop something. When my wife was pregnant she sometimes couldn’t find a resting spot on the 146 or 148 bus after a long day at work because people wouldn’t give up their seats.

I’m sure much of the parenting praise I receive, and the lack of it that’s directed toward my wife, can be attributed to generational and cultural differences, as I’m certain, even in 2017, it’s a shock for some to see a dad taking care of “mommy duties.” But times have changed, and it should come as no surprise that more and more dads want to be hands-on in every area of their children’s lives. That doesn’t mean, though, that those dads deserve a pat on the back for just being around or getting their hands a little dirty. That’s our job.

I think we can all do a better job of delivering praise—and how about stopping the criticism and shaming?—to the ones who have, for far too long, taken on much of the parenting duties while being unappreciated for all their efforts.

Why I didn't move after a nearby shooting

How I stopped worrying and deserted the mommy war