Education in Chicago: What can be done? 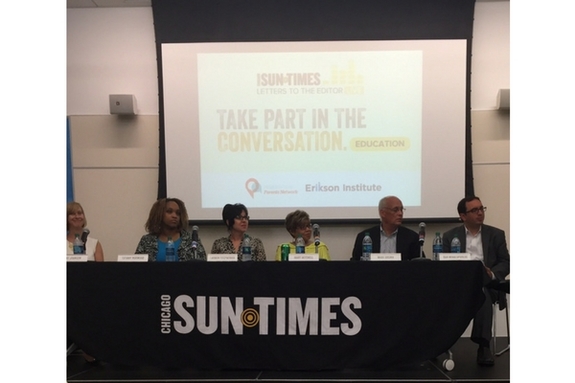 What's the state of education in Chicago, and what can be done to make sure every child gets access to the same opportunities? Those were the questions guiding Tuesday evening's panel discussion, Letters to the Editor Live: Chicago Education in Crisis, presented by the Chicago Sun-Times and Neighborhood Parents Network.

The panel—comprised of Sun-Times reporters and columnists Lauren FitzPatrick, Dan Mihalopoulos, Mark Brown and Mary Mitchell, as well as NPN's Amy Johnson and Tiffany Norwood, both CPS moms—fielded tough questions from moderator Jim Kirk, editor/publisher of the Sun-Times, and the audience of parents and community members.

The result? Some salient points and overarching themes are outlined below, but one thing that can't be emphasized enough is that reporters like those on last night's panel want to hear about what's important to you and what you think readers should know about. So if there's something about Chicago education that you think is underreported, don't shout into a vacuum: Contact these reporters!

Okay, off the journalism soapbox (John Oliver does a much better job anyway) and onto some of the issues covered during the panel discussion:

Parents and community members are frustrated with CPS and Chicago Board of Education. No surprises there. People are upset about the lack of transparency when it comes to Board of Education decisions and CPS's apparent lack of a strategic plan to improve education in Chicago.

An elected school board may not be a horrible idea. Reporter Lauren FitzPatrick cited her investigation of Board of Education votes over the years and few, if any, cast dissenting votes on any proposal. And while an elected school board would likely invite patronage, steep campaign spending and every other issue that can come with running for elected office in Chicago, coud it really be worse than what we have now? "It's worth a try," columnist Mark Brown says.

Impoverished and minority students need more CPS support. Columnist Mary Mitchell said 82% of CPS students live in poverty, and CPS has failed at finding a way to create environments that are nurturing to poor kids.

But there is good CPS news. One audience member, a CPS mom, noted that CPS 4th graders lead the nation in growth in math scores (8th graders also have shown nation-leading growth in math scores). The graduation rate is growing (though not as quickly as CPS originally stated). And there are some parents doing great work to make CPS schools better. FitzPatrick mentioned the Logan Square Neighborhood Association's Parent Mentor Program, which recruits parent volunteers to assist teachers and work one-on-one with students—after 100 volunteer hours, they get a stipend.

Stay tuned for more NPN education programming and discussions. In the meantime, if you're searching for the right school—public or private—for your child, don't miss our upcoming school fairs.

Advocating for your diverse learner in CPS

An abbreviated guide to applying to CPS