Raise your child to be a global citizen | NPNparents.org 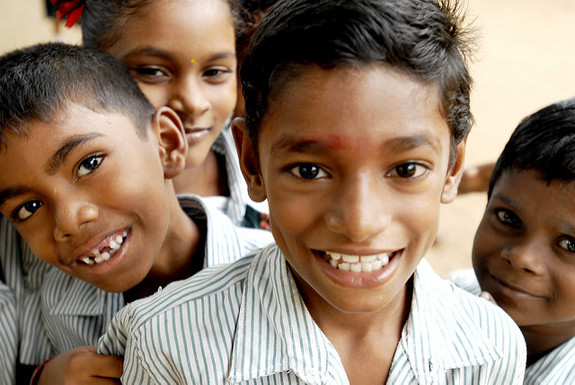 Global citizens are aware of the world outside their communities, and understand that we are all interconnected. They seek knowledge about other cultures and embrace other people's differences with curiousity.

By raising global citizens, we parents are making our own contributions to a better world, and, thankfully, it's pretty easy to do. Here are 5 ways you can raise a culturally aware child.

Enroll them in language classes. English is not the first world's most spoken language (Chinese is). It's not even the second (that's Spanish). That fact alone puts Americans' place in the world in perspective. And while some schools offer foreign language as an elective, private language classes offer a more immersive experience, which can keep your child's interest growing for years to come.

Discuss current events at home. Even some of the world's most harrowing and complicated events, such as natural disasters and political coups, can be explained to kids in an age-appropriate way. Watch BBC News (a much more global-focused newscast than most U.S. outlets) together and answer your kids' questions, or check out news websites that cater to kids (the American Library Association offers a great list of sites). Keep a map or a globe on hand to show them where these events are happening.

Get them involved in a cause. Being aware of world events can stoke a child's interest in contributing to a cause. Encourage that inclination by suggesting he raise money for a charity via lemonade stand or bake sale; donate birthday money to a cause; give seldom-used toys and outgrown clothes to a local charity; or volunteer his time. CharityNavigator.org allows you to search for charities by cause (everything from animals to religion) and location (there are 174 Chicago charities listed), among other criteria.

Surround them with difference. Some kids are lucky enough to go to a school or daycare that's a hodge-podge of cultures and socioeconomic backgrounds. If that's not the case for your child, you'll have to make the effort to seek out difference. Go to parks in diverse neighborhoods and chat up parents. Go on a family outing to one of Chicago's many cultural festivals (the Chicago Cultural Alliance lists fests, neigbhorhood tours and exhibitions in our city's cultural enclaves). Consider hosting exchange students.

Travel internationally. Seeing different countries for themselves is one of the best ways to broaden a child's understanding of the world, but for those of us who can't afford to take the whole family on an expensive overseas trip, there's an intriguing option: volunteer vacations. Many organizations, such as Globe Aware and Cross-Cultural Solutions, make a special effort to accommodate families on these learning trips, which often cost a fraction of a typical vacation to that country. In most cases, you'll have plenty of free time to explore the area, and your accommodations and food are included in the price.

Since 1998, Language Stars has provided fun and interactive foreign instruction to help children become global citizens. With locations in Chicago and surrounding suburbs, as well as the Metro DC area, Language Stars uses a FunImmersion® approach to teaching to instruct students in Spanish, Mandarin, French, German, Italian and Arabic.

5 things moms should never say to other moms