I fear my Black son becoming a man 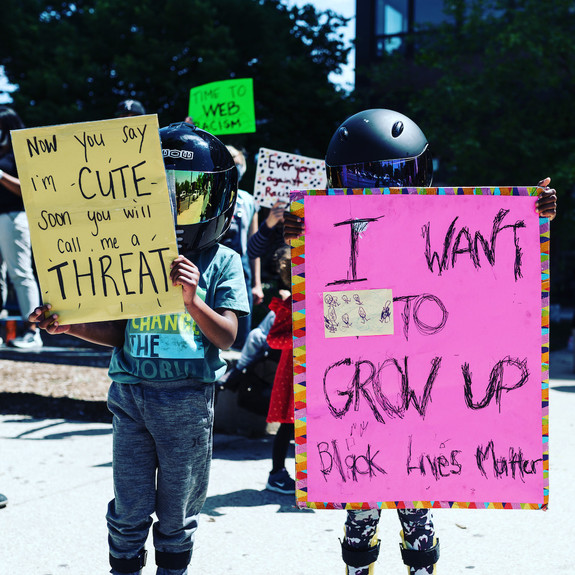 You fear viruses, kidnapping, accidents, and other parenting woes. I fear the day my sweet baby boy becomes a Black man.

I fear the world that doesn't value his life. The world that lives in denial, claiming all lives matter to them.
When I think about the day my son will drive a car and be stopped by the police, I shudder in fear. I wonder, How I can protect him, a camera in his car? An alert that will dial me immediately and send me his location if he gets pulled over?
I will teach him to respect police, be polite, keep his mouth shut, stay alive, but I know that without real change, it won't be enough.
He will have to learn the painful lesson that he can't act the same as his white friends and his own white parents, that he doesn't have the same freedoms as them. He can't ask why he is being pulled over, he can't quote his rights. He must stay painfully silent and compliant or risk death.
I will try to teach him to strive for perfection, that small infractions will be punishable by death, but it won't be enough.
The videos confirm, it won't be enough.
My small voice feels powerless to control how the world chooses to see him, but still I advocate endlessly. I fight for a world that won't see my sweet, snuggly, special-needs boy as a threat.
All of the horrific murders play over and over in my mind. I picture my son's face. I have nightmares of his body broken, bloody, left to soak in the asphalt because he has to live in a world that doesn't value him.
I am afraid for these Black children entrusted to my care, their birth families, my Black friends. I am just afraid. I see murder after murder and lay awake in hopeless despair.
I want the rest of my community, my family, my friends to grieve with me, carry the sadness. A few do, but most won't. Their silence speaks volumes. They claim to love these children, yet they are unwilling to speak up for them.
My feelings as a white woman parenting Black children are insignificant in comparison to Black parents who have carried this trauma, this fear for centuries longer than I have, who not only fear for the safety of their children, but also for themselves, because being killed in front of their children in broad daylight and leaving them orphaned is a very real threat.
While I am outraged and scared, it's nothing like what Black families have lived through and have felt for hundreds of years. They are the true experts on this topic, but in honor of raising awareness and giving them a break to process and grieve recent events, I share my experience.
Fellow parents, this isn't the time to argue or point blame, it is the time to cry for justice and safety together. This is a time to rally together and say enough is enough.
It's time to listen to the Black voices who have cried out in fear and oppression, respect them, grieve with them, not blame them for the violence against them.
I hope to add advocates to the ranks in my community. Don't let it be the death of my son to be the thing that finally wakes you up, because let's face it, if nothing changes my son could be shot by the police playing alone in a park in broad daylight.
From one parent to another, please, join the movement, fight injustice, advocate for a world where Black lives matter.
Julianne Neely MSW, LCSW, is a business owner, special needs mom, foster-adopt parent and pediatric therapist. Julianne has become the leading expert in pediatric mental health in Chicago, where she owns and manages Individual and Family Connection. At IFC, she has the privilege to manage a team of amazing clinicians who are passionate about working with children and seeing them thrive.

I keep my child at home all winter, to save her life