How I got my toddler to eat like a normal human 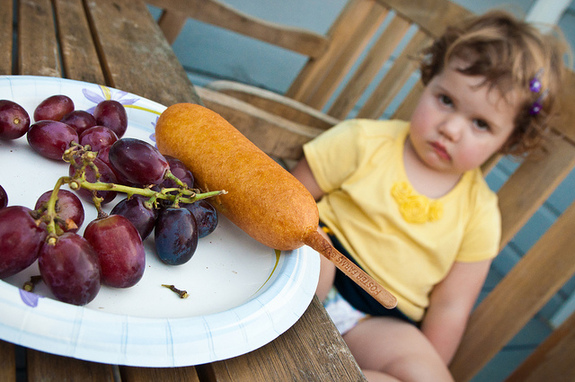 My daughter Sophia, now 5, is one of the strongest willed people I have ever met. So when toddlerhood hit, boy, did she dig in her heels, especially around food. As a health coach, having her subsist on noodles alone wasn’t really an option for me. I was determined to help her get over her pickiness and tried a lot of different things to get her to expand her palate. I employed these tips and can happily say that she and her 3-year-old brother Sam now request salads for lunch and turn down anything with artificial colors. Here’s what worked for me.

I set some healthy boundaries. When I actually stopped and paid attention to when, what, and why I was feeding my kids, I realized that I was giving them a snack whenever they whined for them. By planning their snacks and allowing them to be a little hungry for their next meal, I found they were more open to eating what I had prepared. When I set up the new family rules around food (and was firm, calm, and consistent about enforcing them), of course they put up a lot of resistance at first. But once they knew that the firm boundary existed, they started to comply and the battles came less frequently.

I made the healthy food fun. Unfortunately, fruits and veggies don’t come in Elsa or Lightning McQueen packaging, so I found ways to make the healthier food more interesting for my kids. I found small cookie cutters, rice molds, colorful silicone muffin cups, colorful picks, and game-type plates to make the food more visually appealing as well as fun. I employed an incentive chart. The “Today I Ate a Rainbow” magnet chart gave a little added incentive to my kids to incorporate more produce into their meals. We’ve had it for a couple of years now and they still get excited to get a green star for eating cucumbers and orange stars for carrots.

I got them involved in the kitchen. Brussels sprouts. Never thought my kids would be excited to eat them, but I proved myself wrong by giving them the opportunity to help me in the kitchen and feed them into the food processor. They are always more interested in trying the foods that they’ve helped chop, measure, or mix.

I gave them some choices. “Broccoli or cauliflower for dinner?” If they have some say over what’s ending up on their plate, they have a little more buy-in and are more willing to actually eat the healthy foods. I’ve found that giving them that hit of power on the front end often avoids the power struggle on the back end.

I educated and empowered. I spent some time with both of them explaining why it’s important to eat a wide variety of foods, and which foods are the ”most of the time” choices versus the occasional treats. By educating them and empowering them to do what will serve their body best, I’ve found they go the route of making the better choice more often. Are there still battles? Sure. They’re kids — that’s what they do! But I have found that the struggles (and the struggles of my clients) have decreased significantly since I’ve employed these strategies. I hope you will see the same in your kids!

How I deal with my toddler's meltdowns