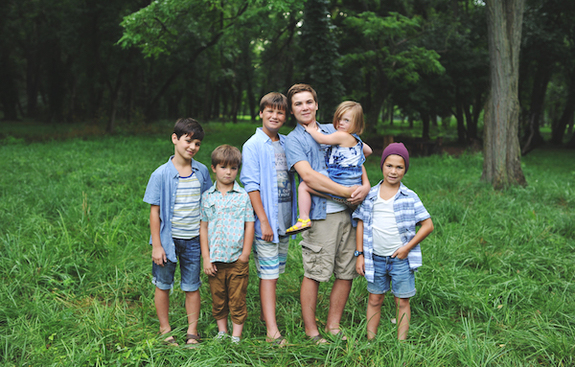 Rarely do you see a person with a disability in an ad campaign that has nothing to do with his or her disability. Chicago mom, NPN member and photographer Katie Driscoll aims to change that with her charity, Changing the Face of Beauty. Her goal? To convince retailers large and small to include people with disabilities in their ad campaigns.

"The common response I receive from the industry is, 'We never even thought about including those with disabilities,'” says Driscoll, whose six kids are pictured, above. "My response is, That's unfortunate, because globally the disability community equates to the size of China. They, as well as their families, are a very brand-loyal community. Our mission continues to remind companies that not only is it socially important to include all people in their advertising, it is actually a good business decision."

She's had incredible success so far. She’s helped put the first model with Down syndrome, Jamie Brewer, on the runway at New York Fashion Week 2015. She has convinced more then 100 companies to put people with disabilities in their own advertising. She partnered with Tori Spelling and her Little Maven clothing line and created a holiday look book profiling kids with and without disabilities. She has appeared on the Today Show during its “Beauty Is” campaign.

But there's so much more she wants to do. Read on to learn more about Changing the Face of Beauty and how you can help.

What is your personal connection to the cause?
Changing the Face of Beauty is a part of our family now. Six years ago when our sixth child, Grace, was born, she was diagnosed with Down syndrome. At that moment our journey began. During the first couple years of her life if was important to me that I could show our world how thrilled I was to be a mom of a little girl after five boys. Her diagnosis of Down syndrome was secondary to our excitement of raising a little girl.

I found the easiest way to communicate just how similar our life was to everyone else's was through imagery. As I started reaching out to small Etsy vendors for images of kids like my daughter, I realized how under-represented children with disabilities were. Imagery speaks so much louder than conversation, so I pushed myself to learn how to use my camera and start capturing kids and young adults with disabilities modeling products. The response was fantastic and gave me the confidence to reach higher. I believe passionately in this mission and it consumes my everyday. I want to leave this world a better place for my children, and that means making sure they are all valued in the world they live in. 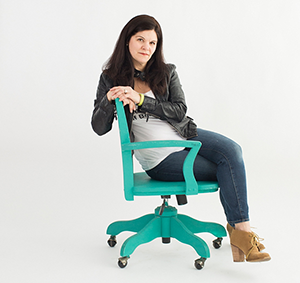 Why is the charity important to Chicago kids?
Changing the Face of Beauty is a reminder of how important it is for all kids to be seen and feel a part of the world they live in. The community of people with disabilities is the largest global minority yet remains the least represented in our media and advertising.
No parent wants to raise a child who is invisible to the world around them. Unfortunately that is what is happening to children and adults with disabilities.
I believe it is important for all kids to be exposed to not only others like themselves but to those kids who might be considered different. Advertising and the media have the power to do that. If parents and their children were exposed to all kids of all abilities I personally believe there would be less fears and more opportunity to enjoy life's milestones together instead of separately.
How has starting CTFOB affected you as a parent?
I am not sure that starting CTFOB really affected my parenting. Having a child that is deemed disabled by society definitely did.  Before Grace, I was the mother of five boys who were developing typically. Until Grace, I had no exposure to anyone living with
disabilities and I was very uncomfortable with people who were considered different.
Having Grace changed my life. It really changed my whole family's life. She opened our eyes to the world as a whole, and for that I am eternally grateful because I now have friends who have disabilities and they are some of the smartest and kindest people I know. They make my life more exciting and actually challenge me as a person to think outside of society's box.
So my parenting style has changed. I am now more concerned about how my kids treat others. I am also concerned about who they are surrounded by. I want my kids to be in environment that lifts them up as well as gives them the opportunity to help others. Because of CTFOB, my kids have and continue to be surrounded by all kinds of people, and I believe they will look back on their upbringing and be thankful of the opportunity to get to know so many different people. Unlike me, they will start out with less fear because the world is their friend.

How can people get involved?
CTFOB is a sum of everyone who has believed in, worked for and demanded change in the advertising industry. It is an ever-evolving organization that needs creative and hardworking individuals to nurture it. There are so many ways for people to become involved.  We are scheduling photo shoots around the world!  We are also holding conversations with companies and asking them to make sure to include the largest minority in the world in their marketing message.
Additionally we are looking for companies to partner with our organization to help us fund projects like PSAs to educate the future marketing world, develop a stock imagery database to give companies and organizations a place to go for good and realistic disability stock imagery, as well as create marketing materials to send to marketing firms who are creating and packaging ideas for their clients.
Posted on January 27, 2016 at 3:13 PM